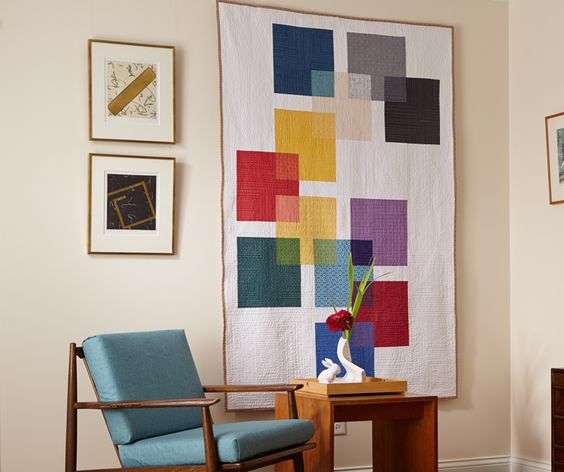 This quilt is a really neat example of transparency in quilts. Boy, I wish I could say it was my work! It’s by Modern Quilt Studio, and it’s super! It is a good quilt to dye for, once you know some dyeing basics.

And transparency is the subject of my upcoming class on Saturday, May 11 at  Quiltfest Lancaster!

You’ll learn all the basics of dyeing, plus receive lots of recipes for colors that you can use to create your own unique transparency effects!
At the bottom of this post for the first time are all three versions of my Shoo-Fly Transparency quilt. What all these quilts have in common is the illusion you can create that one fabric is laying on top of another, and the combination of the two creates a third color.
P.S. – for a look at more samples of transparency quilts, check out my Pinterest board. Thanks! 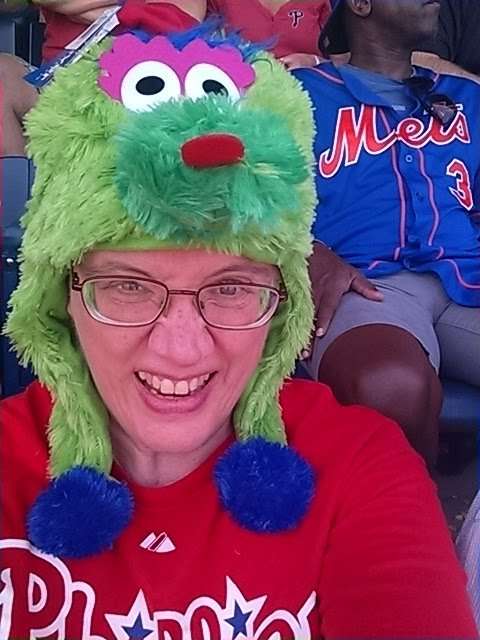 Greetings! Busy as usual here and ignoring the blog. Just took a look at my recent photos to try to figure out where the time has gone. My family surprised me with an early birthday present – a trip for everyone to the Phillies-Mets game. So now I have a Phanatic dangle hat, because I’ve always wanted one! And the Mets won, so the nice guy behind me was happy. And we got to see Rhys Hoskins first hit. Once he got that, he’s been on fire! He’s the NL Rookie of the month for August, and I’m personally taking all the credit. (Ha!)
It’s almost time for our last show of the year, the Pennsylvania National Quilt Extravaganza at Oaks, PA. That’s just west of Valley Forge, for those of you outside the area. There’s still room in my Dye Basics class – and you can still sign up online here, by phone or in person next Wednesday 9/13 or Thursday morning, 9/14 before 9 AM. Let me know if you want to buy a kit with fabric.
Coming up next spring I’ll be teaching at MAQF in Hampton, VA in February and – New Date and Location – QFNJ in Edison in April. If none of those dates or locations work for you – I have some really big news! I will be teaching at Pro Chemical and Dye on May 17 – 18. Sign-ups begin in October – watch this space for a link! And below is a picture of one of my class samples.

Look for quilts by Lisa in next year’s shows – there are currently three on the to-do list that tie into either the upcoming classes or general business of dyeing.
The to-do list also has ‘blog more’ included – hope I will see you here!
P.S. – in you are coming to the show at Oaks and don’t get the newsletter ‘Hues & News’ from DippyDyes, please sign up (we send show coupons.) There’s a link at the top of the column to the right, or click here. Thanks!! 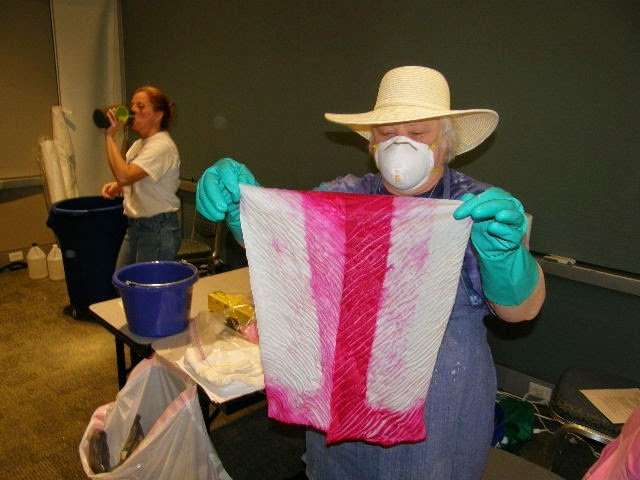 A recent Facebook post by Robbie E. turned into a wonderful discussion all about dyeing and washing out cotton fabric. I made a couple new friends that way; one wrote: “This is making me so confused. All I want to do is start dyeing! Any tips on where to start?” Lots of people pitched in before me to praise Ann Johnston’s book “Color By Accident.” It’s still the standard reference, and I was happy to recently revisit some of Ann’s techniques. I’ve been able to scale up to larger pieces of fabric, given the right container.
Another excellent book for beginners is “Tray Dyeing” by Claire Benn & Leslie Morgan. Time to re-read that one!
There are great on-line resources available at Pro Chemical & Dye and Dharma Trading, plus Paula Burch’s website here.
And, if you’re coming to the Pennsylvania National Quilt Extravaganza show at Oaks, PA, I’m teaching Dye Boot Camp on Thursday, September 14.
Now that the nice weather is here, it’s time to give dye a chance! 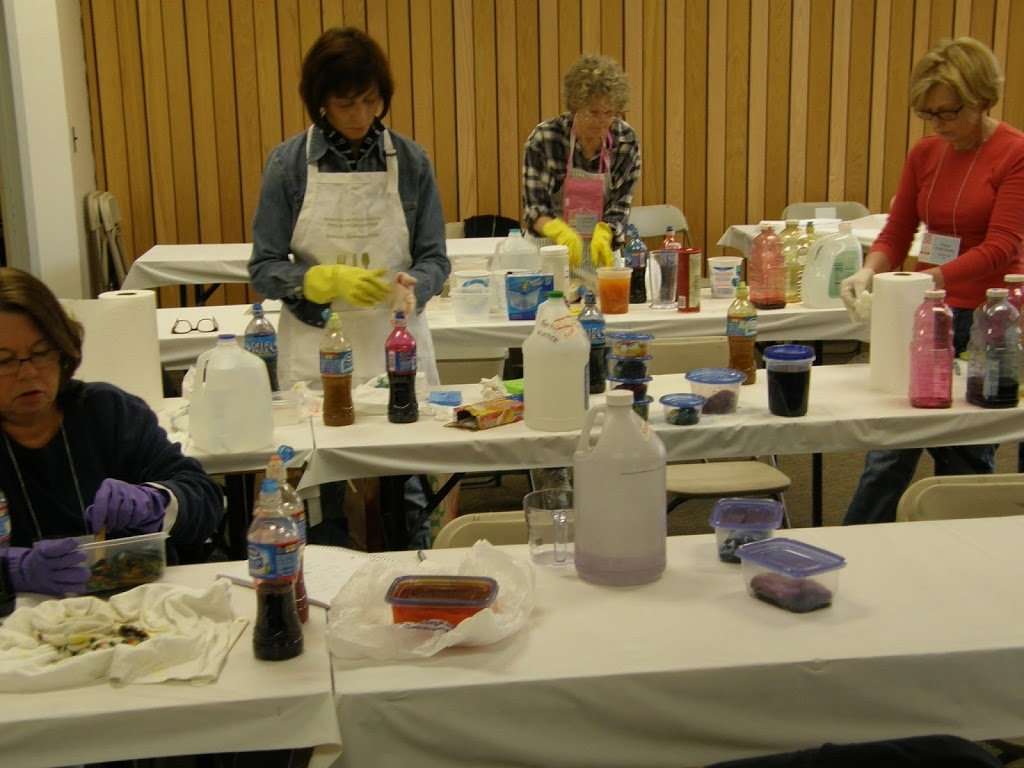 Dye Boot Camp is coming up at MQX – the Machine Quilters’ Festival in Manchester, NH. I will be teaching and lecturing there all week – the first class is Dye Boot Camp on Wednesday, April 5 at 8 AM! It will be a quick four-hour version covering everything you need to know about dyeing cotton quilt fabric – AND about washing it out! #MQX
Sign up here! (It’s the third on the list.)

No hat this year, but the whistle might have to be pulled out!
Categories: Classes Given, Dyeing, MQX, Quilt show, Teaching

Friday, August 12 is the deadline – if there aren’t enough sign-ups for my DYE Classes at Oaks – the Pennsylvania National Quilt Extravaganza – they will be cancelled. To pique your interest, watch this:

Thanks, and here’s a link to the class descriptions! Classes are September 16 & 17.
Next up, an introduction to the other class – a vest that is machine stitched, then dyed. Time to take more pictures!

Well, there are just under four months to go before my “No Muss*, No Fuss” thickened dye exploration class at the Mid-Atlantic Quilt Festival and Quilt Fest of New Jersey. I’ve been busy making samples and taking photographs AND planning what each workstation will contain. I will also be offering kits so you don’t have to pack your own supplies, which adds a whole new wrinkle. They need to be packed by February 1, or earlier if you ask hubby! So here are some photos to give you an idea of what you’ll be working on if you can join us.

Lots of techniques will be sampled.

Ready to spread dye through the screen.

Spreading dye with a scraper.

Stamping in action.
*Did you know that ‘muss’ is really a word? I didn’t. It is, among other definitions, a synonym for mess, or ‘a state of disorder.’ Well, there will doubtless be disorder in the classroom, but then that’s why I’m working on creating order this early!

As you may know, I ran a successful Kickstarter campaign to raise funds for business coaching from Morna McEver Golletz, founder of the International Association of Creative Arts Professionals. Most of those wonderful people who pledged received fabric in some form – with two to go. Three others elected to come to the studio to learn about dyeing. Here’s what Candy created in 5 days of work:

She made a painted screen to print her Kandinsky tree, and dyed yardage to go with it for a quilt. Plus, working in the same color family, she dyed yardage for garment construction. And we made a road trip to Echo Hill for goodies, and to a feed store for salt to use for solids.

On Saturday we headed down to Philadelphia to the craft show on Rittenhouse Square. Chilly, but I got to see Rachel’s booth, and made some other contacts. And – small world – one of those also works with Kathryn Conover, the bridal couturier I’ve been doing some dyeing for.

Sunday Candy headed home, and I took the day off, mostly. Then on Monday Gail came for the day, and had her own personal dye boot camp. Here are some pictures of her newly-rinsed fabrics:

In addition to the four techniques shown (pole wrap, direct application over print paste as a resist, folded and poured from my favorite Ann Johnston recipe, and folded, clamped resist) Gail also did some low-water immersion pieces. If you can get here to my third floor studio in Red Hill, PA, you can spend a dye day with Lisa working on a technique(s) of your choice.

Now I have one more student to schedule, and two folks who want yardage dyed. And my big project for the next month or so is getting ready for the Mid-Atlantic Quilt Festival in Hampton, VA in February, followed by the Quilt Fest of New Jersey in March. I’ll be debuting a new class there – working with thickened dyes. More details later!

Hi all – I will be teaching at the Quilt Fest of New Jersey again this year, in a class called “Manipulation – It’s a Good Thing.”  Here’s a picture of some samples:

For more information and a supply list, see the Manipulations Class page, also listed at right. I hope you’ll join us!

Once we got over the whole problem with the brakes, we went on to vend at three shows in three weeks. Oaks, PA (see below), Chautauqua, NY and Chantilly, VA. As usual, we learned from every experience; the big lesson this fall has been to cut the overhead as much as possible. That means we need to sleep and eat cheaper. We got a microwave and TV dinners; to do that better we need to get the TVDs the day they’ll be eaten, not before. Pop Tarts still taste good when the hotel doesn’t have breakfast.

Got home on Sunday; then had to deal with the credit card issue and do household chores on Monday and Tuesday. Then Wednesday I headed down to Philly to report for jury duty at the Federal courthouse. Took the train to get there, and got a copy of the sports pages from the lady in front of me. That kept me busy in the assembly room, because I wasn’t smart enough to change scissors in my sewing bag. However, it took three guys to get them off me! And yes, I am back working on appliqué. Nothing like a little positive reinforcement for motivation. There’s a picture of the block below –

it’s one of 256, and I’m halfway there. When I got home from the city (not selected), I sat back, watched Roy Halladay pitch his no-hitter and stitched. Aaahhhhh . . . . .

There’s an appliqué class this Monday evening (the 11th) in Red Hill – you can sign up at DippyDyes.com if it’s your first time. Thanks!